A little early with these but i know Claymore Castings are working on the English Troops so thought i might as well get them on the site seen as i have them.

I have also done Flags for Henry IV and the Earl of Northumberland. I know neither was at Otterburn but the minis can obviously be used for more than that one Battle.

More flags and shields to come for the English. 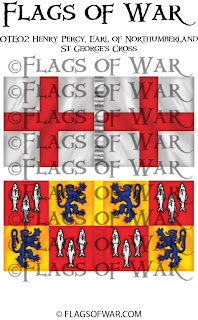 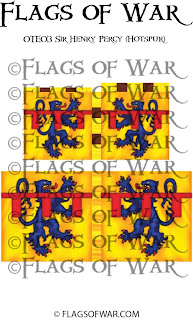 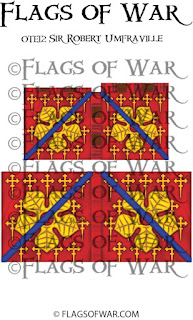 A little while ago David asked me to model a L-shaped banner pole for casting and production. After taking a good look at the lovely Flags of War banners available to complement the Claymore Castings range we decided that it would be better to just do a quick tutorial on how to know these up as a pewter pole would inevitably bend in one direction and then the other and we all know how impossible it can be to get the damn things back into shape!

So, first things first. It may seem obvious but it's best to have all the tools at hand before you start, though in true 'Darrell Spirit' ™ I have ommited the Thick Superglue from the picture below!

A Sharpened Coctail Stick (as pointy as possible) 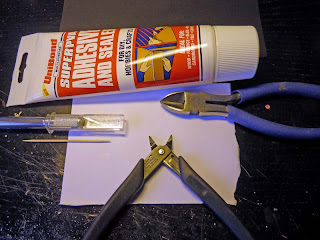 The next thing to do is to cut out the flag using a sharp modelling knife being very carefull i/not to cut you fingers off and ii/ to ensure you are as accurate as possible when it comes to cutting into the 'flaps' which will be rolled arounf the banner. Once done, try the banner for size around the upright pole. At this point I would suggest that the best spears to use are the one's available from North Star as they are nice and thin as well as very strong (and sharp at the point!). 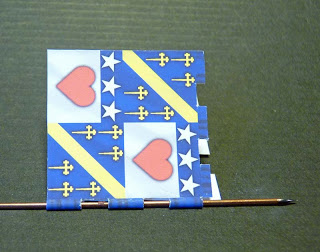 Once you got the banner in a satisfactory position then it's time to apply the glue. It is important to point out that you must endevour to leave the 'flaps at the top of your banner as free from PVA as possible; this will become obvious in the next stage. I use Unibond PVA but any PVA will do the trick as long as you add water and apply it in a thin-ish coat. A thick coat may adhere to both sides of the flag very quickly which will not give you much room to manoeuvre the paper into the exact position. Too thin and the paper will warp due to the high water content being absorbed. 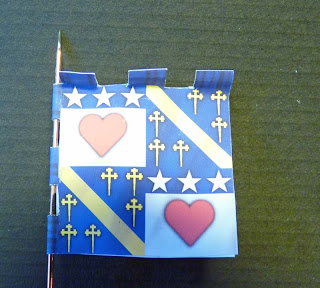 The next bit can be a bit fiddly. First you need to make the cross bar for the banner. If you're a bit of a meiser like me you will have some 'offcuts' from some of the longer spears that you may have already cut down? If not then just cut off a length of the bottom of one of your spears ensuring you leave a little bit of the pole sticking out, trailing as it were. Take the shortest flaps on the top of the banner and apply a layer of thick PVA. Once done roll these tabs around the cross bar. It's then just a case of repeating the process with the longer 'flaps' at the top rolling them over the shortest. 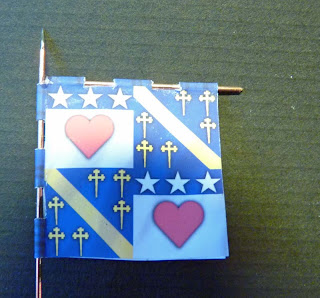 The last thing to do is to apply a tiny blob of superglue with your sharpened coctail stick to the part of the cross bar that will touch the pole at 90 degrees. You must then carefully push the cross bar against the upright pole, through the loops you have made and then leave to dry. Once dry, well, there you have it. A quick and easy guide to producing L-shaped banner poles. 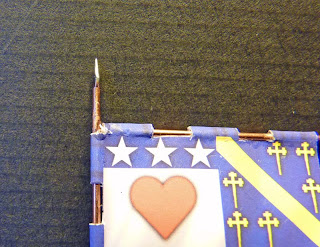 I hope you find this little article usefull. A lot of it is commen sense but there are a couple of little tricks in there that will hopefully prove usefull.